The 2017 Virginia Gubernatorial Race Based on County Population 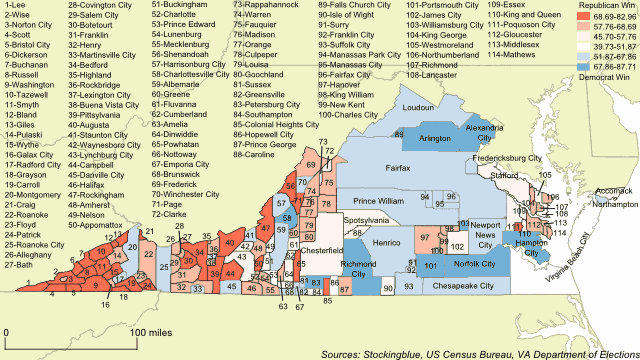 The geographically accurate cartogram above represents the Virginia governor's race results based on the population of each county.  The more populous a county is, the larger it is on the map.  Looking at a map of Virginia with the results of this race, the entire state is painted red leading the casual observer to believe that the Republican candidate, Ed Gillespie, won the race.  However, the map above shows that those small pockets of blue are very populous and what they lack in geography they more than make up for in votes and it gives a better picture as to how the Democratic candidate, Ralph Northam, won the race.

Chesterfield was the most populous county that Gillespie won and even there, it was by a slim margin.  He did really well in counties with small populations.

On the other hand, Northam did well in populous counties and managed to win several counties with small populations as well as can be seen in places like Williamsburg City (103 on the map), and Brunswick County (68).