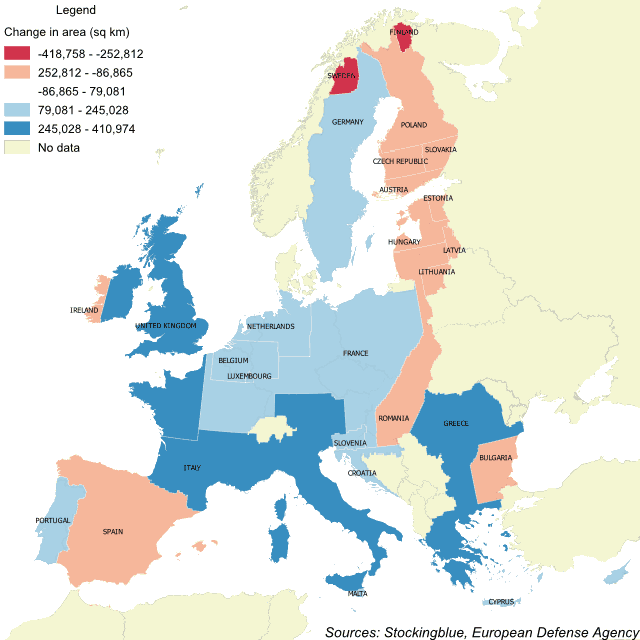 Altering the borders of the European Union based on the number of military personnel each state has creates an unrecognizable European Union.  In this geographically accurate cartogram, the United Kingdom, Italy, and Greece expand their borders drastically while Sweden and Finland cede much of their territory.

On a percentage basis, Malta is the biggest winner, expanding its territory by over 2,100% gaining a part of Sicily in the process.  Other big relative gainers include Cyprus which claims Crete and the southern Greek islands, the Netherlands which expands into Germany, Belgium which does the same and expands into France as well, Greece which reaches the Hungarian border, Italy which takes over southern France, and the United Kingdom which overtakes Ireland and northwest France.  All of these states at least double their territory.

The biggest losers on a percentage basis are Finland and Sweden who cede 95 and 92% of their territory, respectively.  Also losing over half their territory are Latvia, Estonia, Lithuania, and Ireland.

If the United Kingdom leaves the EU, the EU will lose its fourth largest army in terms of military personnel.

Also interesting to note, that huge chunks of the EU become western European states (if one includes Spain, Italy, and Greece in the western category).