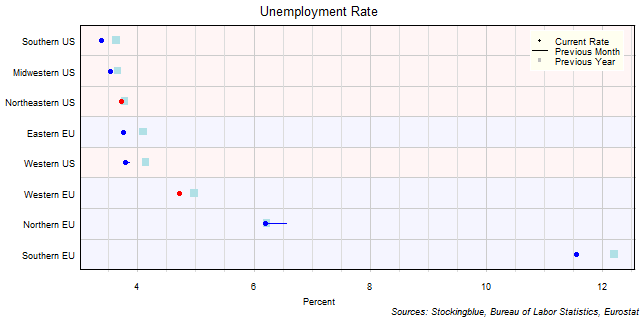 The chart above shows the unemployment rate in each EU and US region as of December 2019 (unless otherwise noted - see caveats below), the change from the previous month, and the rate one year prior.  US regions continue to have considerably lower unemployment rates than EU regions with the Eastern EU being the only EU region that tops a US region.

In relative terms, the Northern EU had the biggest monthly improvement dropping its rate 5.49%.  The Northeastern US had the greatest deterioration over the previous month raising its rate 1.09%.  Year over year, the Western US saw the greatest improvement with a 8.45% drop in its rate.  The Northern EU saw the smallest reduction with a 0.32% drop in its rate.