US President with a Parliamentary System 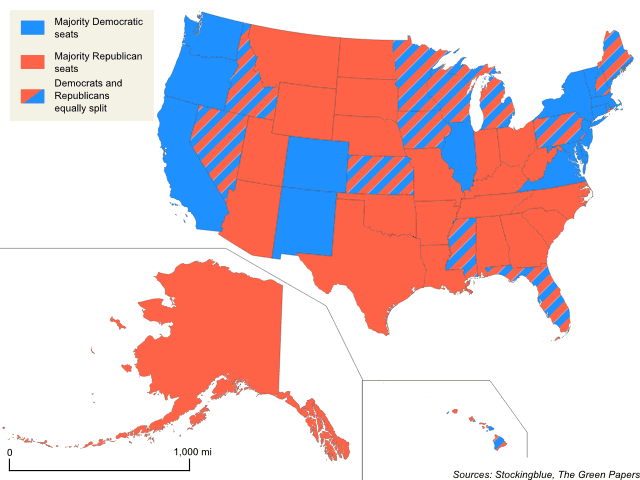 Yesterday's post looked into who would win the European Commission Presidency if the EU had an electoral college.  Today's post flips the script and looks at who would be President, or rather, Prime Minister if the US had a parliamentary system.  The map above shows which party would have the most seats in each state with a total of 435 seats and 218 needed to win.  Since so many states came so close, they split the seats between Democrats and Republicans.  In addition, three other parties make it into parliament, with the Libertarians, the Greens, and Utah's independent candidate Evan McMullin also gaining seats.

What this exercise shows is that neither Trump nor Clinton would have had an absolute majority with which to govern and that the one to become Prime Minister would be the one that can convince the Libertarians, the Greens, and/or Evan McMullin to work with them in a coalition government.  If they could not pull that off, they would have to work together in a grand coalition.  Imagine that.

The table below shows the allocation of seats in the Parliament according to percent of the vote each party received in each state.  The Democrats and Republicans continue to dominate by holding majorities or sharing power in every single state.

It is a strong possibility that either Clinton or Trump would have attempted to govern with a minority government if they could not come to terms with the other parties.  That means that they would have to reach out to either the Libertarians, the Greens, or McMullin to get legislation passed.

It should also be noted that the US and EU governing and political cultures are vastly different.  Americans vote for their local representative who will fight for the issues of the locality to which the representative is elected.  Europeans vote for a political party to enact a specific set of laws throughout the land.  In America, politics is very local as the representative looks out for the needs and wants of his constituents who reside within a specific geographic area.  In Europe, parties expect their representatives to vote the party line and representatives do not necessarily represent a specific locality.  Each system is different and each has its pros and its cons.  This post does not suggest that one is better than the other, it is merely a succinct review of a political process.