Per Capita Air Travel in EU and US States 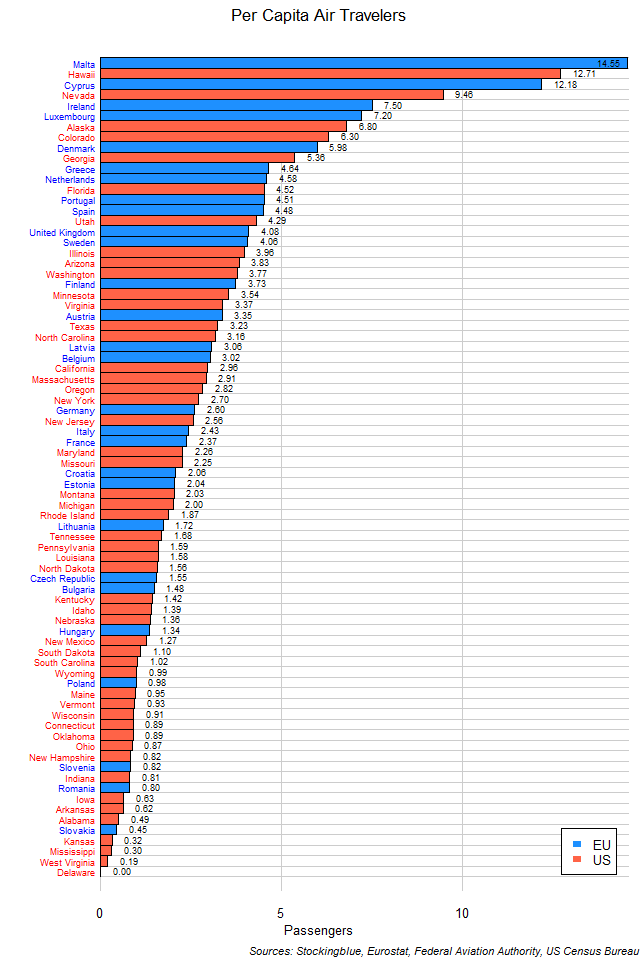 The chart above shows the number of passengers that traveled by air for every resident in each EU and US state.  The only three states to have more than ten passengers per resident are all island states.

The United Kingdom which has the most air travelers overall, ranks 17th when its population is taken into account.  The other two leaders in the overall metric, Germany and Spain, rank 34th and 15th in this metric, respectively.

As noted earlier, Malta, Hawaii, and Cyprus are the only states with more than ten times their population in air passengers.  An additional six states have more than five times their population in air travelers (in descending order of travelers): Ireland, Luxembourg, Alaska, Colorado, Denmark, and Georgia.  Obviously, island states will fare better in this metric because the modes available for interstate travel are limited.  For Hawaii, they are limited even more as ferries are not really an option as the state is located in the middle of the world's largest ocean.  In addition, the state is made up of several islands.

Twenty states have less air travelers than they do population.  Four are from the EU and 16 from the US (which also includes Delaware which has no airports).

Of the 19 states with a population over 10 million, Greece, the Netherlands, Florida, Portugal, Spain, and the United Kingdom have more than four times their population in air travelers.  On the other end of the spectrum, Poland, Romania, and Ohio have less than one air traveler for every resident.